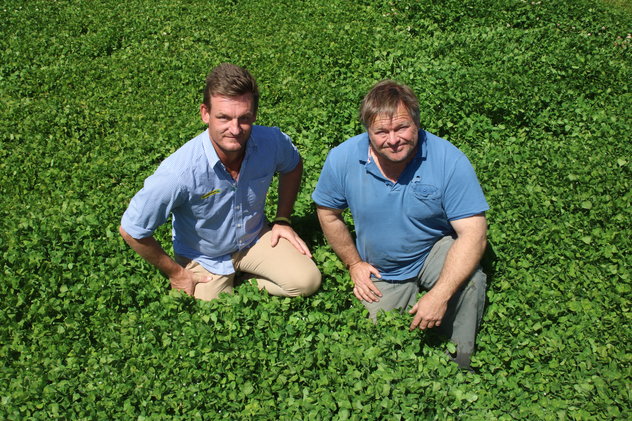 Jeff and Simone Smith who farm at Trawalla, 30km north north-west of Ballarat, were looking at having a ‘two-way bet’ last year when they sowed down a sheep paddock to Antas sub-clover.

They run about 360 Angus Breeders and 1000 ewes that are bought in and mated to Dorset rams for prime lamb production.

Planted as an on-farm trial, one idea was to let the Antas set seed and have it run as a renovated pasture paddock for ewes and lambs. The other was to cut it for hay.

In many years of testing, Antas sub-clover has produced more than double the dry matter of other sub-clovers and its amazing seedling vigour and winter growth gives it excellent production throughout the year. High winter and late season herbage production make it an ideal choice for grazing, and its very large leaves are attractive to livestock with high levels of digestibility.

“Last year was my first season growing Antas. So, I wanted to do a 20ha area, just to try it and see how it would go,” Jeff said.

“Despite the very wet and cold conditions of last winter and spring, it grew very well. Antas proved to be very robust, more robust than the balansa clovers.

“It was quick to establish, even though it was sown later than ideal in May. We could see it come up and spread out and grow well, even though there wasn’t a lot of sunny days last winter.

“I grazed it three times with a stocking rate of about 10 sheep/ha for three weeks each grazing and it recovered well compared to other clovers.

“The sheep didn’t scour at all. They preferentially grazed it down, so it must have high palatability.

“It cut high quality hay at the end of the season and because we cut it for hay, it didn’t set seed. The plan is to over-sow Antas again this year at 15kg/ha.

“If it does well again I could have a market for small and big squares of pure Antas,” Jeff said.

“There’s strong weight of evidence now to show just how well Antas performs across a broad range of pH and soil types, to consistently produce large amounts of dry matter,” said Heritage Seed Territory Manager, Reece Hardwidge. Antas is a brachycalcinum sub-clover, with large seeds, large leaflets and good early seedling vigour. It grows well heading into winter, copes well with waterlogged conditions and despite being somewhat of an aerial seeder, it does seed down low which helps produce dry matter in its second year also. The benefit to growers is a demonstrated moderate resistance to Pythium (Pythium spp.) and Fusarium (Fusarium spp.) along with higher hard seed characteristics compared to that of Clare. More hard seed allows Antas to build up a greater reserve of seed in the soil over time, thus enhancing persistence and productivity over many years.”

Reece said care should be taken with all newly sown pastures to not overgraze too early to avoid small seedlings being pulled from the ground. Light grazing during the establishment period will help control weeds and encourage dense prostrate growth. Once established, heavy grazing of Antas up to flowering will improve seed set,” he said.