Cracka - Good grain sorghum when it is tough going 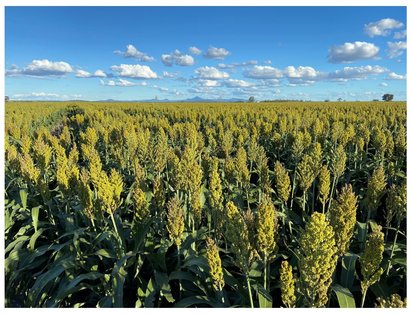 The Newell Highway is iconic for travelling the inside passage of New South Wales and marks a difference between east and west for growing conditions. For Cracka grain sorghum, either side of that divide presents no problem. It’s hardy, tolerates dryland conditions and the hot summer heat that is characteristic of the region.

The Moree Plains sit on the northern end of the Newell Highway in New South Wales, a region known for its extensive agriculture. This is also home to Andrew Turner’s ‘Waterloo’ broadacre cropping property.

A regular feature of Andrew’s cropping is grain sorghum, grown as a summer crop. Planting as a rule commences September through to October, with harvest in February the following year. Over three seasons, Andrew has used different varieties of grain sorghum, but it is Barenbrug’s Cracka variety that has continued to provide reliable results despite sometimes difficult odds.

The summer season of 2018 – 2019 was particularly difficult as it marked the start of a devastating drought for the region. Much less than the average 550 – 580mm rainfall fell that year, and the crop endured searing temperatures in the 40s for days on end. Many summer crops struggled that season.

“The year before, 2017 was a below average year, and from there on it got progressively worse,” said Andrew Turner, Waterloo, Moree.

“We had a few varieties planted that year, but it was Cracka that survived that hot, dry summer and bounced back after a sprinkle of rain in February. A lot of the other varieties gave a lot of vegetative mass, but no harvestable grain. Cracka definitely was able to convert that small amount of moisture the best – rain to grain!”

Andrew commented that he had chosen Cracka grain sorghum for its aggressive growth out of the ground – germination to head emergence is around six to eight weeks. That short turnaround means he can plant to ‘dodge the heat and harvest before it gets too cold’ on a late plant.

“That tough year at the start of the drought, the Cracka crop yielded 2.5 – 3.0t/Ha – more than 1t/Ha more than we thought it would achieve, while the other varieties really struggled,” said Tony Lockrey, manager of AMPS Moree, and Andrew’s agronomist.

“In a ‘normal’ year, you would expect to harvest around 4 – 5t/Ha, so it was remarkable how big the heads were that year and its ability to set grain. The Cracka grain sorghum is the one we recommend the most for our region. 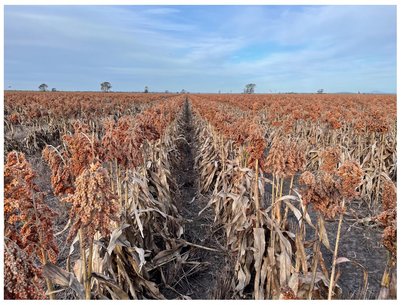 “The head size on the tillers that come on the late rain was exceptional. While in a good year we may harvest 4-5t/ha, the Cracka grown on Waterloo that year made a remarkable record to yield well above average for that season.

For this reason, Tony is confident recommending Cracka to produce grain in any season, and feels it will shine in tough conditions.

“Our trials show it can be relied upon to efficiently produce quality grain in a wide range of soil types and growing conditions.”

The Cracka grain sorghum is well suited to the region and able to utilise stored soil moisture to thrive in the variable summer rains and hot temperatures. Cracka tolerates the heavy alluvial, grey cracking soils that are alkaline on Andrew’s property but will do well in the red chocolate soils that are well known in the region.

‘Waterloo’ focuses on efficiency and adaptability. While crop rotation plans are formulated, they are not set in stone as they need to be flexible enough to cope with seasonal variability. While the 2019 winter crops was close to a failure across the district, the current wet year has allowed some double cropping to catch up on lost production. Cracka was planted in January this year and has again proved its ability to deliver a solid yield.

“Cracka is one of the better short season varieties. Standability is also important, it doesn’t fall over, I have never had any trouble harvesting it. The open head, standability and regular height has meant it is quicker to dry down and gives a good yield and can hang on until it gets decent rain,” said Andrew.