Amira is a relatively early flowering lupin variety that produces high yield in similar areas to where Kiev Mutant was popular before the outbreak of anthracnose.  It has consistently yielded higher than Andromeda in the the northern agriculture region of WA and is suggested as a replacement of Andromeda. Amira is best suited to the medium rainfall areas of northern wheat belt of WA where anthracnose pressure is not high. Its level of anthracnose resistance is not high enough for the  wetter coastal locations, such as the Chapman Valley and Griffith in NSW without fungicide protection.

Amira (tested as WALAB2014) was bred by Dr Kedar Adhikari at the Department of Agriculture and Food, WA in partnership with the Council of Grain Grower Organisations Limited (COGGO). It was derived from a cross between Kiev Mutant and a WA bred anthracnose resistant line 98B001-5-6.  It has the good agronomic and quality traits of Kiev Mutant and the anthracnose resistance of the other parent.

Amira is an early flowering and medium height variety with significantly higher yield and anthracnose resistance than Andromeda. 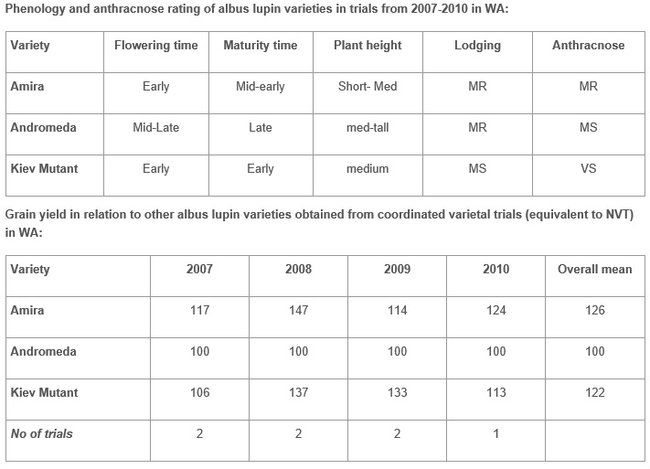 Amira is well suited to the fertile loams or clay loams that occur in valleys throughout the state and the red soils of the Mingenew/Mullewa/Morawa region. It will not grow well in in-fertile sands or duplex soils. Amira is adapted to soils of slightly higher pH than narrow-leafed lupin, but will not grow well on loams and clays with a pH above 7.5 if these soils become saturated with water. Avoid, where possible, blue lupin infestations (fencelines, paddock populations) which harbour anthracnose.

Dress seed with a thiram based product to limit transmission of seed borne infection and with iprodione or procymidone based products to help control seedling brown spot. If the paddock has not been cropped to lupins (any lupin species because they all utilise the same rhizobium species) in the past 3 years then also inoculate seed with Group G rhizobium.

Herbicide tolerance trials in Western Australia (red clay loam and red sandy loam soils) show that Amira has good tolerance to herbicides commonly used in albus lupin production. Its herbicide tolerance is similar to that of Andromeda and Kiev Mutant. It has low tolerance to mixtures of lexone or simazine with Brodal, except where lexone is used in conjunction with Brodal. Severe seasonal effects on herbicide activity can occur and work is ongoing to validate findings under differing seasonal conditions.

Target the sowing date used for albus lupins in your region. Gains in yield and grain quality can be made from timely sowing.

Sowing depth: aim for a sowing depth of 3-5cm, Take care not to sow too deep because emergence of seedlings declines sharply with deeper sowing, particularly on soils that form a crust.

Sowing rate: 40–45 plant/m2 is the optimum plant density which corresponds to a sowing rate of 150 kg/ha subject to seed size & germination test.

Use coarse metering wheels on air seeders, if available to avoid cracking seed. An agitator in the seed box will also help seeds flow smoothly. Albus lupin seeds are flat and squarish and tend to pack down and flow poorly if not agitated.

Establishment pests such as red-legged earth mite and lucerne flea should be monitored and controlled as necessary.  Amira is tolerant to aphids in WA conditions, but it will be affected by native bud worm (Helicoverpa sp.). Native budworm is potentially the most serious insect pest of Amira. Monitor for native budworm during podding. Spray thresholds have not yet been developed for AmiraA, but as a rule of thumb spray insecticide if there is more than 1 budworm per 10 sweeps. The timing of insecticide sprays is critical for protecting yield. Do not wait for the caterpillars to grow.

Commence harvest when the pods turn yellow and the seed moisture is about 14 per cent. Do not delay harvest even though pods are unlikely to shatter or shed. This will ensure seeds remain undamaged and are of high quality. A guide for harvester settings is given below. Use wide wire concaves or remove alternate wires of a cereal concave because the seeds are large. Start with the closest concave clearance and the slowest drum speed. Increase concave clearance if seed is being cracked. Increase drum speed if seed is left in the pods. Remember also to handle seed carefully after harvest to avoid damage. 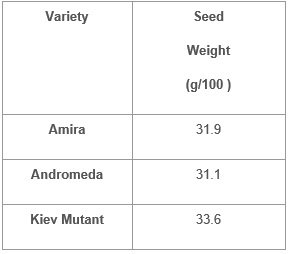