GBA Ruby combines good drought tolerance with an outstanding package of disease resistance in a taller, mid-season semi-dwarf variety that is well suited to the medium and low rainfall zones of the northern and central wheat belt of WA. It also has a proven history of high yield in southern NSW and Victoria environments.

The superior disease package, especially for stripe rust resistance and robustness of GBA Ruby maintain competitive dollar returns per hectare from coast to coast. The Cereal Rust Laboratory in Sydney rates GBA Ruby in the most resistant class for the WA race of stripe rust. Importantly the resistance is built on the Yr27 gene that is relatively rare in Australian varieties, a factor predicted to extend the life on the resistance of GBA Ruby beyond that of other varieties.

Consult preferred agronomist / advisor for up to date advice on specific varietal management and agronomy relating to GBA Ruby.

This variety is registered under Plant Breeders Rights (PBR) in Australia. Unauthorised commercial propagation or any sale, conditioning, export, import or stocking of propagating material is an infringement under the Plant Breeders Rights Act (1994). Any breach of this legislation will leave the grower liable for prosecution.

An EPR of $3.00 / T excluding GST is payable on all GBA Ruby grain produced.

GBA Ruby has consistently out-yielded most commercial varieties. It has completed a number of development cycles and has been especially selected to provide stripe rust resistance. GBA Ruby has been yielding similar to Wyalkatchem where disease pressure exists. It has a long coleoptile and useful waterlogging tolerance combined with low screenings and a high test weight at harvest. Growers have noted the advantages of Ruby as a competitor in weedy paddock. 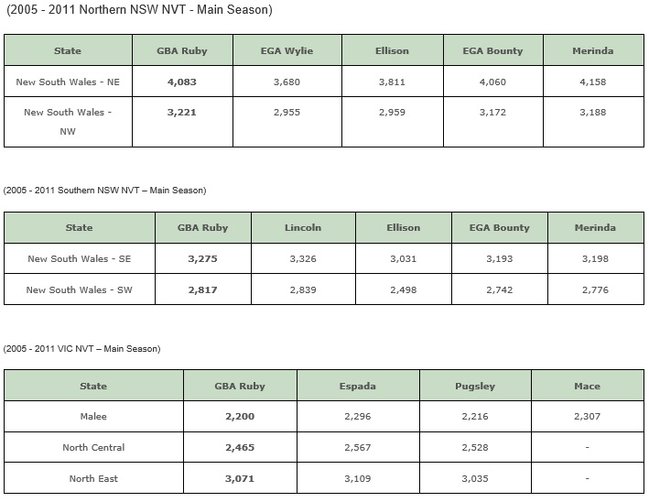 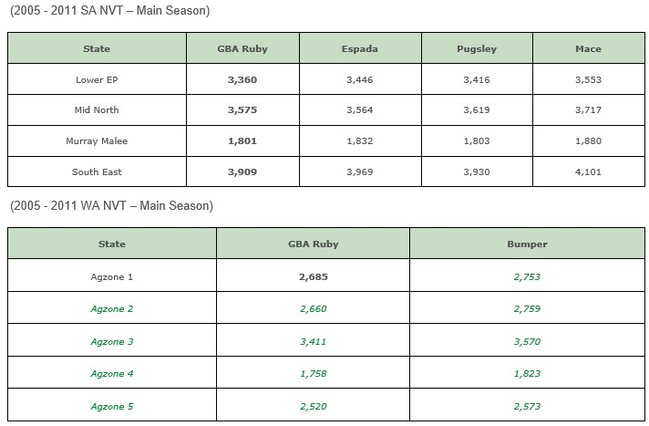