Nugget is a mid-season red lentil commercialised by Agriculture Victoria. It has shown excellent adaptation to the Wimmera/Southern Mallee regions of Victoria, (375-600mm annual rainfall) where it continues to have strong demand due to agronomic traits and market acceptance . Nugget has a similar seed type and quality to Digger, the most widely grown lentil in Australia. Commercial seed of Nugget was produced using pedigree method with selection for agronomic characteristics, seed, type, ascochyta resistance and freedom from virus. Nugget has the characteristic morphological traits of lentils from the Middle East region. It has a short branching growth habitat and pinnate leaves. In trials Nugget lodges less than or as much as all cultivars, except Cumra. Nugget has a medium sized lens-shaped seed with red cotyledons and a grey seed coat. The seed of Nugget is similar to those of Digger and Cassab in weight, size, shape and colour.

Growers in most areas target an established plant population of 120 plants / m2.

An EPR of $5.00 / T excluding GST is payable on all Nugget grain produced. 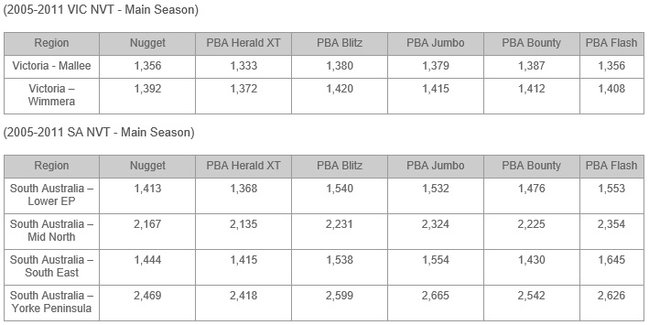 Nugget has moderate resistance to foliar infection of Ascochyta Blight. Limited trials indicate that, although Nugget does not carry the gene that confers seed resistance to Ascochyta Blight in Northfield, under high disease pressure the level of seed infection in Nugget was higher than in Northfield but lower than for other commercial varieties. Nugget has also been assessed for resistance to Botrytis grey mould and was found to be among the more resistant varieties. In limited tests for CMV and AMV in 1998, Nugget displayed more severe virus symptoms than Digger and Cassab, but less than other varieties.

Consult preferred agronomist / advisor for up to date advice on specific varietal management and agronomy relating to Nugget.