Download a copy of the Jester-SU Barrel Medic factsheet.

Jester SU (Medicago truncatula Gaertn.) is a new barrel medic which has all the features of Jester combined with tolerance to sulfonylurea (SU) herbicide residues.

This makes Jester-SU an ideal variety for growers in low to medium rainfall areas who have used a sulfonylurea herbicide in their previous years crop. In alkaline soils, SU herbicide residue can persist at damaging levels to sensitive varieties for, 1-5 years.

Jester-SU and Sultan SU are the only two barrel medics in the market with SU residue tolerance.

This variety was bred by the highly successful team at the South Australian Research and Development Institute (SARDI) and is a superior replacement for the original Jester and older variety Jemalong. Along with SU residue tolerance it has good resistance to both blue green and spotted alfalfa aphid.

Jester-SU is predominately suited to southern Australia’s semi-arid cropping zones
where it provides nutritious feed for livestock, improves soil fertility through nitrogen
fixation and can act as a disease break for various cereal root pathogens. 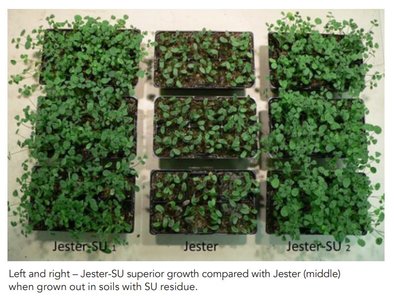 Establishes well if sown dry (from mid April onwards) into cereal stubbles free of broadleaf weeds and with good weed control from the previous year. Can also be sown into a fine, moist weed free
seedbed soon after the break of the season.

Higher seeding rates will improve competition against weeds and allow for earlier grazing in the first year.

Sowing depth of 1–2 cm is ideal and ensures good seed soil contact. Mixtures of different varieties can
help overcome seasonal, soil and rotational variability, e.g. Jester-SU could be sown with Sultan SU or Angel medic to accommodate variable soil types within the paddock.

Inoculation:
Inoculate seed with group AM rhizobium unless the paddock has had a healthy stand of medic in the past two years. Good nodulation is essential for maximum nitrogen fixation which will benefit the following crop.

Weed control:
Maximise seed set in the establishment year by reducing weed competition as much as possible. Early removal of grasses with grass selective herbicides results in improved pasture growth and reduced carry over of cereal root diseases such as take-all and CCN. Less selective means of weed control such as spray grazing, winter cleaning and spray topping can be more safely used to control weeds after the initial year, when medic density and soil seed reserves have built up.

Pest / disease control:
Jester-SU should be monitored closely for RLEM (red legged earth mite), lucerne flea and cowpea aphid damage, especially in the first year of establishment, spray as necessary. Occasionally will be affected by black stem fungus and rhizoctonia

Grazing – Establishment:
Defer grazing until the plants are well established and then only graze lightly until flowering, stock should be removed until the stand has finished flowering and producing pods to maximise seed set. Carefully monitor summer grazing, especially in the first year, as overgrazing of pods will reduce future pasture regeneration.

Grazing - Regeneration:
Initially defer grazing at the break of the season to maximise  plant establishment. Then apply grazing pressure to control upright grasses and encourage prostrate growth until ground cover is complete. Increase grazing pressure if necessary to prevent overly bulky pastures which are more susceptible

to moisture stress and foliar fungal disease. Ensure a good seed-set at least one year in four to maintain adequate seed-soil reserves for maximum persistence, regeneration and production. 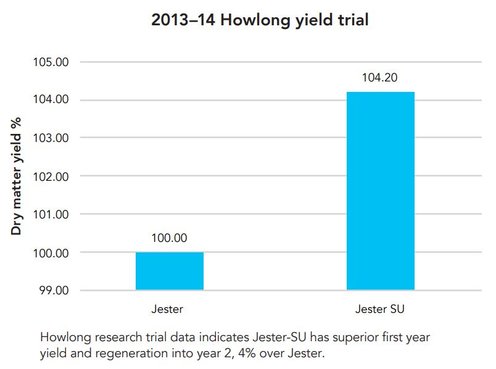 Disclaimer: The information presented in this brochure is from official and other sources and is considered to be reliable. It is provided in good faith and every care has been taken to ensure its accuracy. Barenbrug does not accept any responsibility for the consequences that may arise from the acceptance of recommendations or the suggestions made.