Download a copy of the Holdfast GT Phalaris factsheet.

Holdfast GT (Phalaris aquatica) has been developed by CSIRO to be a highly persistent and productive phalaris for Australian red meat producers in the 500−700mm+ temperate regions of Australia. Holdfast GT develops a broad crown that produces daughter tillers from below the soil surface. This enables the plant to spread and withstand heavy grazing pressure better than other winter active types such as Sirosa or Holdfast. Holdfast GT produces significantly more forage production than Australian (semi winter dormant) phalaris, with a large part of the forage gain coming in late autumn, winter and early spring.

Conventional sowing, or direct-drilling can be used, however if direct drilling weed and pest control, seeding depth and seed-soil contact need to be ideal to achieve good results.

All phalaris cultivars are relatively slow establishing species, therefore pest and weed control is critical to establishing a successful stand. Reduce weed seed burden by ensuring the year prior to sowing is used as a clean-up phase either by spring hay/silage cropping and/or spray-topping to prevent weed seed set the spring prior to establishment. For best results, do multiple years of clean-up. A spring sown brassica crop can also be a good clean-up strategy to control grassweeds. Always ensure an autumn knock-down is used prior to sowing (post the season break). It is recommended that a systemic fungicide and insecticide seed treatment1 is used for improved pest tolerance, vigour and stress tolerance.

Holdfast GT thrives on heavy soil types and will establish in mildly acid soils (pH 4.5−8.5 in CaCl2 ) that are free of aluminium (less than 5% exchangeable aluminium). Correct soil pH with lime the 2−3 years prior to sowing if unsuitable. Sow with starter fertiliser such as MAP or superphosphate. Correct soil fertility prior to sowing, especially phosphorous and potassium deficiencies. Nitrogen use can aid grass growth and can be considered to increase establishment (in year 1) and forage production. Holdfast GT is typically partnered with sub-clover as an ideal legume companion to produce a high quality perennial pasture.

Holdfast GT is safer to graze and has lower levels of phalaris staggers and sudden death producing alkaloids than Australian phalaris. However, under some extreme circumstances alkaloid levels may become problematic to livestock (particularly sheep). In areas prone to phalaris toxicity, plants should be grazed cautiously in the autumn and early winter. Holdfast GT can be grown with other legume or grass species to help reduce the risk of illness. Phalaris toxicity, or phalaris staggers can affect sheep that are grazing on fresh breaks of phalaris. Stock are most susceptible to phalaris toxicity on short, frosted plants, which mainly occurs during the autumn or early winter period.

To counteract the potential problem, stock can be orally administered with cobalt bullets and also by ensuring that stock are not hungry when introduced to lush, green feed. The greatest risk to animals is when they ingest a high level of toxic herbage quickly. Toxicity levels in the plant can also increase if plants are subject to various stresses such as drought and frost. Seek local advice from animal health professionals for specific grazing management and animal health strategies to manage potential toxicity issues.

1 Seed treating with Poncho Plus® insecticide is recommended as a sound investment for phalaris to help aid establishing plants through the first month. Poncho Plus® can help to protect seedlings from pests such as red legged earth mites, blue-oat mite, yellow headed cockchafer, wireworm and African black beetle. 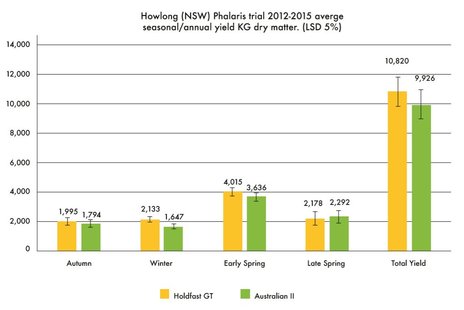