Alfalfa harvest is well underway with the majority of dryland crops completed and almost of half of irrigated crops either done or being done this week. Many crops have been desiccated in the last week in preparation for this week’s warm weather.

Yields have been variable, tending average to below average, due to losses sustained through both adverse weather conditions in November (frost) and extended extreme heat waves in January.

Whilst some localised rain events are expected towards the end of March throughout the production zone, the extended outlook suggests a dry autumn which should suit the later maturing crops that seem to have set well and look like being above average. Seed quality has been acceptable, with cleanouts at average to above average levels ranging from 15-22%.

New planting areas are being prepared over the next couple of months in preparation for autumn seeding during May/June. 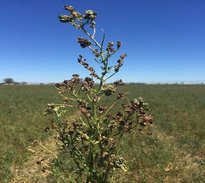