Continued rain events during April made the irrigated alfalfa seed harvest challenging and disappointing due to quick regrowth and seed drop in the paddock, above average clean out percentage at the cleaning shed and seed quality dropping with some seed lines being rejected.

Since May we have seen average to above average rainfall across the key seed growing regions of South Australia and Western Victoria. Newly planted stands in the upper South East have established well (generally lighter soils) and weed control has been on time, whilst the lower South East seedling stands vary with weed control due to traffic ability on the heavier soils and still a number of sites to be sown due to water logging and paddock prep. These will be sown within the next three weeks.

Established stands have now been shut up for the first hay cut or continued to be grazed due to the strength of red meat production offering strong returns to growers. Again like last year dryland alfalfa growers will take advantage of the full soil moisture profile and extra pasture for livestock, locking dryland alfalfa paddocks up for seed production. 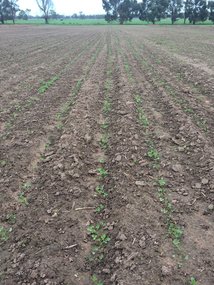