SARDI-Grazer is an ideal fit for: 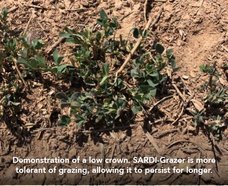 SARDI-Grazer is a winter active cultivar that has been bred to withstand spells of continuous grazing of up to two months. To gain sound establishment the crop should only be lightly grazed in the first year, as per all alfalfa varieties. Once established, it can be grazed in a two paddock rotation with 6–8 weeks grazing followed by 6–8 weeks recovery. The recovery period is critical for recharging energy reserves of the plant which will maintain excellent levels of production and persistence.
SARDI-Grazer can also be recommended for any grazing enterprise, as the results from New South Wales, Victoria and South Australia show exceptional persistence under management practices currently used on commercial farms. Alfalfa may be suitable for planting in soils with lower pH levels, provided exchangeable Aluminium levels are very low. A reliable soil test and advice from an agronomist is strongly recommended.

Some 120 alfalfa varieties and breeding lines, many of which had previously undergone two cycles of selection under continuous sheep grazing, were evaluated in a continuous grazing trial at Roseworthy SA. After two years, surviving plants were dug up and replanted next to aphid and disease resistant selections for open pollination. The harvested seed resulted in the formation of 11 breeding lines that were sown along with commercial comparators in two parallel continuous grazing trials: one at Turretfield, SA on a clay loamy with gravel on the surface and another in Katanning WA on an acidic light sandy soil more conducive to physical disturbance from the trampling of sheep. Following nearly two years of continuous grazing by sheep, the breeding lines were found to maintain substantially higher plant densities than commercial varieties. Individual plants were dug from the best lines at Katanning and Turretfield and further evaluated based on their agronomic performance and yield potential. The final parental plants used to develop SARDI-Grazer were selected based on resistance to aphids and diseases (BGA, SAA, PRR, and Anth), herbage yield, herbage quality (bushiness and fine stems) and winter activity rating. 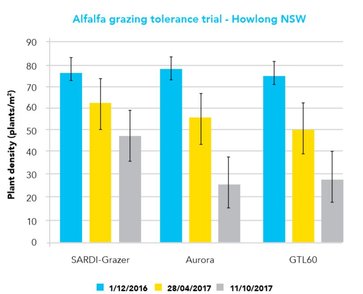 SARDI-Grazer is highly resistant (HR) to spotted alfalfa aphid (Therioaphis trifolii) and blue-green alphid (Acyrthosiphon kondoi). As with other alfalfa varieties, SARDI-Grazer is susceptible to damage from red legged earth mite (Halotydens destructor) and control measures need to take place prior to seeding or soon after germination. AgriCOTE seed will aid establishment in these circumstances.

Plant Breeders Rights (PBR): This variety is registered under Plant Breeders Rights (PBR) in Australia. Unauthorised commercial propagation or any sale, conditioning, export, import or stocking of propagating material is an infringement under the Plant Breeders Rights Act (1994). Any breach of this legislation will leave the grower liable for prosecution.
Disclaimer: The information presented in this brochure is from official and other sources and is considered to be reliable. It is provided in good faith and every care has been taken to ensure its accuracy. Barenbrug does not accept any responsibility for the consequences that may arise from the acceptance of recommendations or the suggestions made.