Monti is an exciting sub-clover that belongs to the Yannincum sub species. It is the earliest maturing cultivar of this type. Has exceptional early season growth and regenerates reliably. Monti will improve the legume content and productivity of pastures in the waterlogged areas. Monti’s flower is predominantly white with slight pink venation. The seed of Monti is similar in appearance to that of other yanninicum cultivars, being relatively large (approximately 146,000 seeds/kg), white coloured seeds. Monti has a semi-prostrate growth habit. It has been selected for use in permanent or long term phase pastures. Monti is adapted to temperate areas receiving 450-550 mm annual rainfall and will perform to its best where intermittent winter waterlogging occurs. Like other yanninicum cultivars, Monti is particularly well adapted to moderately acid soils (pH 4.5–7.0 CaCl2) that range in texture from sandy loams to clays.

Sowing Rate: 2 – 8kg per hectare in a pasture mix or blend.

Seed Bed Preparation: It is recommended to sow following the autumn break into a fine, well prepared seed bed. Seed should be sown with a starter fertiliser and the correct inoculant applied to the seed. Alternatively AgriCote coated seed can be used which includes inoculant, fungicide, micro nutrients and bio stimulants to enhance germination.

Sowing: Best results are achieved by direct drilling sub-clover into the top 1 – 1.5cm into a fine seedbed, press wheels or light rolling will assist establishment in most cases. This should be avoided if the soil is hard setting.

Grazing: Sub-clovers respond well to grazing once established, this is generally when plants will not easily pull from the soil. A good seed set is vital in the first year of a sub-clover pasture to ensure regeneration in the second and subsequent years. To encourage seed set, medium to heavy grazing through late winter/early spring is recommended. Stock numbers should be significantly reduced when the sub-clover starts flowering and until seed set has occurred. Best regeneration will occur the following autumn if the remnant dry growth is removed and good weed control is undertaken. Hay making in the establishment year should be avoided as it will significantly reduce sub-clover seed set and future regeneration.

As the earliest maturing Yanninicum cultivar, Monti is well adapted to take advantage of shorter growing seasons whilst still producing high levels of dry matter. The early maturity, good hard seed level and high seed yields also lead to a more reliable regeneration and persistence over time. Reliable regeneration is also dependent on the amount of soft seed available at the autumn break. Table 3 shows that the soft seed levels of Monti had increased to around 33% by May, similar to those of Trikkala and Gosse. In contrast, Riverina and Napier had the lowest soft seed levels and demonstrated the poorest seedling regeneration. 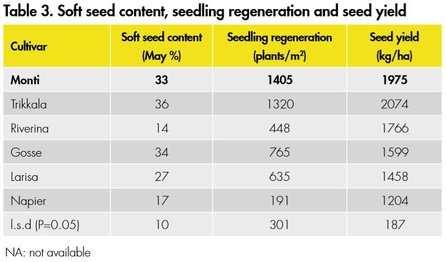