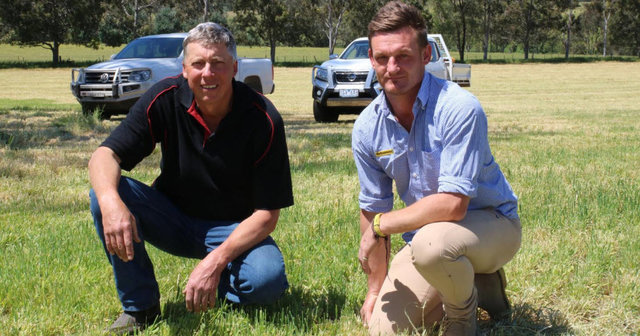 Gooram beef producer Andrew Douglas was looking for a new pasture solution for his 240ha property.

As is typical of farmers in Gooram Valley, Mr Douglas took on the challenges of soil acidity and pushing stocking rates high enough to make a good living.

He was looking for a tough perennial grass that would survive times of droughts and thrive in the good times, regenerating quickly after rain to stop the weeds from invading.

Mr Douglas has primarily volcanic country that runs back into granitic soils and he said the acid tolerance traits of Advanced AT from Barenbrug was a tempting option.

‘‘We can deal with acidity in the topsoil but sub-soil acidity is hard to counteract, so we want a species that’s adapted to and has longevity in acid soils,’’ Mr Douglas said.

‘‘It costs a lot to establish perennial pastures in paddocks.

‘‘We don’t want to be re-sowing every few years. It’s just not economic to do that, so I was looking for a grass that has good acid tolerance and I tend to graze harder than some, so it also needed to be tough and persistent and tolerate grazing,’’ he said.

Advanced AT is a winter-active phalaris with superior establishment and root penetration on acid soils, especially in tougher seasons.

This phalaris variety has wide adaptability and due to its broad breeding background produces well, even in soils with pH down to 3.9.

Complementing Advanced AT for Mr Douglas was another phalaris from the Heritage range called Holdfast GT.

Bred by the CSIRO, Holdfast GT is a grazing-tolerant winter-active phalaris that has been selected for long-term persistence under grazing (both set stocking and rotational grazing).

Said to increase productivity over the life of the stand, Holdfast GT has lower levels of staggers-causing alkaloids and, like Advanced AT, has the ability to grow in acidic conditions.

In autumn 2016, Mr Douglas planted one of his paddocks to a 50:50 mix of the two phalaris types. By mid-summer he was delighted with the results.

‘‘The year before, we’d limed the paddock and sowed a general pasture mix which was cut late for hay,’’ he said. ‘‘Then we put chook manure out over the summer, so the fertility was right up.

‘‘I direct-drilled the Advanced AT and Holdfast GT phalaris and got a really good strike, but it did have to compete against weeds that were there,’’ he said.

Mr Douglas said he could see the potential of the phalaris varieties used when everything went to plan.

‘‘With the competition that was there, it wasn’t a textbook scenario, but I could see the potential for these phalaris varieties when everything is done right.

‘‘When the summer rains came the phalaris came away and really thrived. It proved to be very tough and very resilient and I can see a big future for it.’’