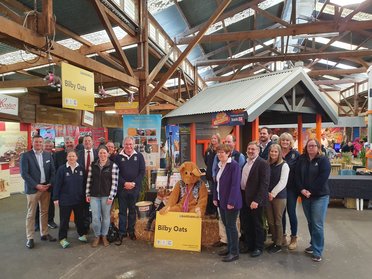 A new oat variety developed in South Australia and being launched at the Royal Adelaide Show today will benefit farmers, grain processors and consumers.

Minister for Primary Industries and Regional Development Tim Whetstone said the new ‘Bilby’ oat would quickly establish as a popular variety with its high yield and large, high-quality grain.

“Farmers will be impressed with the potential grain yield of ‘Bilby’ crops, and the high ratio of groat (the edible part of the grain) to hull or husk means higher milling yield, which is great for processors,” said Minister Whetstone.

“The good news for consumers is that Bilby offers high beta-glucan, which has been shown to reduce blood cholesterol.”

“The National Oat Breeding Program produces oat varieties found in many popular porridge and muesli products as well as oat varieties that are exported to Asia as high quality hay,” said Minister Whetstone.

“SARDI’s Plant Research Centre at Waite has a significant concentration of expertise in the area of cereal breeding, and, as we can see with the launch of ‘Bilby’, our researchers are leading the way in developing the crops of the future.”

GRDC general manager of business and commercial Steve Thomas said oats are an important component of farming systems in Australia, providing growers with profitable grain and hay options in their cropping rotations.

“The nutritional benefits of milling oats are well recognised and we expect consumer demand for this functional food product will continue to increase,” Dr Thomas said.

“It is therefore necessary that we, as an industry, invest in the development of varieties that are high-yielding, resilient, well-adapted and of high quality to meet the needs of consumers and support profitable grain businesses.”

‘Bilby’ has been in development since 2006, with the past two years dedicated to building up commercial seed quantities. 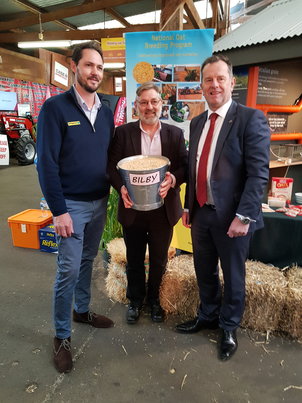