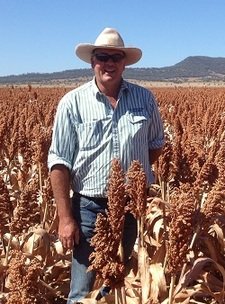 The Premer Field Day is indeed a prestigious event. Held about an hour and a half drive south west of Tamworth, it has been running for close to 40 years and recognises and rewards the efforts of local farmers in the Premer district.Mr Simson was awarded the Mick Gaynor trophy for Local Farmer of the Year for the second year in a row. This trophy is awarded on an accrued points basis for a combination of crops including canola, sorghum and wheat.

He also picked up the award for best local sorghum crop, with an outstanding field of HGS-114.

This variety is continuing to prove its value in the grain sorghum growing districts of Eastern Australia. It is a premium option that’s broadly adapted, and demonstrates an ability to perform in nigh yield potential sites.

It is a medium tillering variety with an impressive package of very good seedling vigour, head exertion and head uniformity and ultimately, high yields.

Barenbrug Northern Regional Agronomist, Tony Stewart, said not only had Mr Simson picked a great variety for his conditions, he had also applied excellent agronomic management to the crop.

Planted in November 2015 at the target sowing rate of 55,000 seeds per hectare, this dryland crop received just 100mm of in-crop rainfall.

“Subsoil moisture, plant establishment, weed and insect control and nutrition were all well managed for this crop and it was a real field day highlight.” Mr Stewart said.

“It became commercially available in 2013 and its performance since then has shown it is very well suited to areas from Central Queensland south to the Riverina / MIA region of Southern NSW,” Mr Stewart said.