Taking on share farming in the dairy industry was always going to be the next step for Cory Jones. Cory started 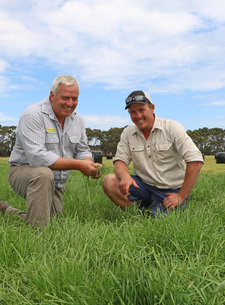 milking cows when he was 16 and his passion has always been with the industry. After managing a 1200 cow dairy where he worked his way up to manager, he moved last year to 280ha property in Naringal East, Victoria.

Despite the challenges, he said the change has been very satisfying indeed. The property was purchased by the current owner in 2014 with the intent of setting up a share farmed agreement. For Cory it appeared to be the perfect opportunity and one that was too good to miss.

The land was in need of a big injection of money and hard work when he took over and with just a few weeks until the season break, it was all systems go!

Improved pasture was the main focus to drive profits. Soil fertility had to be improved and more productive species planted.

“I took over in March 2015,” Cory said. “We’re about 20m east of Warrnambool in blue ribbon dairy country. With a rainfall of about 1500mm per year, the potential’s huge.

“Bealey was a ryegrass variety I used in NSW and in southwest Victoria on the previous farm I managed. We had 1200 cows strip grazing on 6ha blocks and even though they were only on it for a day or so, they can do a fair bit of damage.

“But the Bealey, no matter how hard we smashed it, it would come back and come back well and from the middle of winter and coming into spring it would be on a 20 day paddock rotation. The cows would always milk well of it.

“Because we had so many cows on the previous farm we were always trying new grass varieties, but none were better than the Bealey.

“So when I moved to this place I knew I had a window of about four weeks to get grass in the ground before it started raining. I went straight down and ordered as much seed as I needed to get things underway and put it all in.

“I know the cows are going to milk well when they go into the Bealey, it’s a real benefit to the business.”

“You can have the paddock next door full of any other perennial ryegrass that you’ve got, and if say 380 cows go in they’ll milk about 10000L.Take them off that and put them in a paddock of Bealey and you know they’re going to be up 600L“

“When we sow it, it just jumps out of the ground and it competes really well with everything else. It will knock weeds out of the park.

“Cows can chew it off nice and hard. That’s the way it likes it and that’s what you want to get the full benefit out of the grass, rather than the cows picking and choosing what they eat.

Cory said Bealey perennial ryegrass needs to be well fertilised. In autumn and spring he applies a fertiliser blend according to soil test needs. Every month he applies 100kg/ha urea.

“In the past, this farm has been one of the most highly regarded properties in the district. What we are trying to do now is bring it back to its previous potential or even better.

“At the moment we’re milking 400 to 450 cows and getting 9000L a year out of the cows. And there is plenty of work to be done with further grass rejuvenation, improving the soil fertility, getting on top of weeds.

“It’s going to go through various stages as we try to bring it back to its peak potential. Getting the grazing right is just the start,” he said.