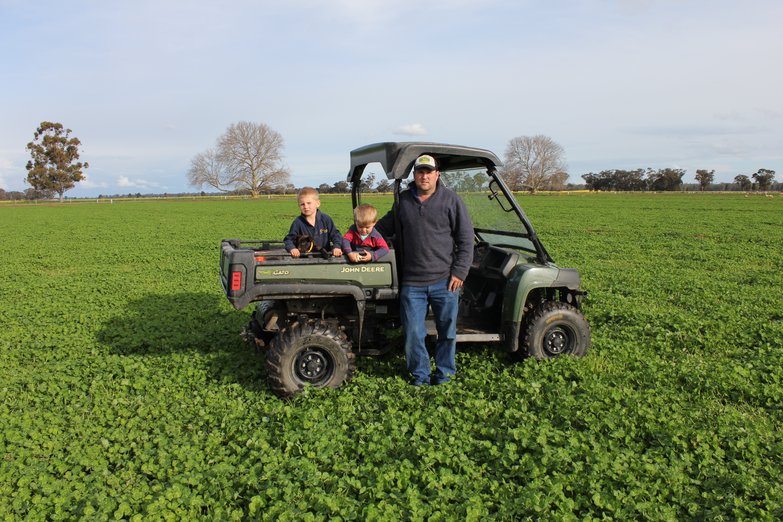 After many years of continuously growing wheat, canola, barley and oats, Ben Wilson was looking for solutions to help manage the challenges that typically develop under continuous crop.

The Tocumwal farmer figured a hardy sub-clover might be the best way to tackle herbicide resistant annual ryegrass, provide a disease break and put nitrogen back into the soil.

His intent wasn’t to ‘just break even’ with the sub and then get back into cropping, but to make some real money turning off prime lambs with it and making hay by season’s end.

Clover hay production would fit nicely into the Wilson business with the family having a feed plant in Tocumwal that supplies mainly export oaten hay, but also hay to domestic markets.

After some investigation, Ben chose a Barenbrug variety called Antas sub-clover for its dual high grazing production and hay quality. Mid-way through the season it’s fair to say he’s been really impressed.

“We wanted to put legumes and pulses back into our rotation and we wanted to target the domestic market with a compressed clover product,” Ben said.

“One of the advantages with planting sub-clover by itself is to target any annual ryegrass herbicide resistance issues.

“The idea was to control the ryegrass population early with Select and Verdict, and Raptor to take out broadleaf weeds, then graze heavily to control ryegrass and then cut the sub-clover early, before the ryegrass set seed.

“Then come back with a spray of propyzamide after that, lock it up and irrigate it. If it got to the stage where the propyzamide didn’t work, we’d forgo the second clover hay cut and spray it out with a non-selective herbicide.”

Ben said the secret to managing ryegrass with livestock is high stocking rate, and once his Antas paddocks were established he introduced lambs into them at the rate of just under 20 per hectare.

“The paddocks were stocked in mid-June, about 80 days after the clover was sown. We had an early break and the Antas clover got off to a strong start, which I believe is common for that variety.

“The first lot of lambs we bought averaged 34 kg live-weight. Eighty percent of those were sold two months later at 54.5 kg, so they put on 20 kg. The next lot averaged 47.5 kg.

“We do tend to buy in forward lambs, but it was an unbelievable turnaround for the time we had them on the Antas.

“In retrospect I should have put them on there earlier and stocked heavier as the growth was just so strong.”

Ben said the first hay cut in spring would be a heavier domestic cut followed by a propyzamide spray and a smaller, higher quality hay cut aimed at the horse market.