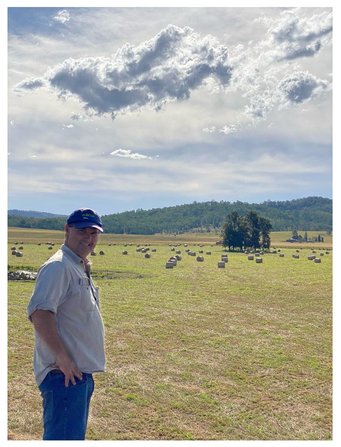 Having downsized from a large beef operation to a 160-hectare hay and horticulture operation in north-east NSW, Carl Hooton and his father Mark are careful to select the right hay varieties to drive their business.

When in 2020 they grew a new variety which out-yielded their previous best Rhodes grass performance by a wide margin, while delivering the best quality they have ever produced, it goes without saying they were very happy.

Key to success in the Tabulum district are fast establishing varieties for good growth from October through to June, while also being able to handle any dry periods through Spring. Also critical is the ability of varieties to deliver yield and quality.

“It comes down to the softness of the hay and the ease of cutting,” explains Carl. “You can have trouble with cutting some pasture varieties of hay, and it can also get a bit stalky and not as luscious quality. Basically, it's not as palatable for livestock.”

Carl also works for Norco in Armidale, and it was through this role that he was invited to Barenbrug's state-of-the-art Howlong (NSW) facility, which hosts a number of pasture trials. It was on this trip that he was first introduced to Endura Rhodes grass from Barenbrug.

“I just happened to mention we were Rhodes grass hay producers, and I was pointed in the direction of Endura Rhodes grass by some of the Barenbrug staff,” Carl recalls.

“Working on the NSW Tablelands, we don't grow too many subtropical grasses, so, it was good to find out about the new variety. Basically, that was the foot in the door with Endura Rhodes grass.”

The Tabulum area was coming out of a record drought at the end of 2019, but with some rain in early 2020 and a positive forecast, the Hooton’s decided to plant a block of Endura Rhodes grass on the 16th January. They direct drilled at 7 kg/ha, straight into a sprayed-out existing pasture paddock, also applying 85 kg/ha of single super fertiliser.

“We had an ideal season between planting and the first cut, you couldn't have asked for better conditions,” Carl says.

“The Endura Rhodes grass flew out of the ground and established itself straightaway, we couldn't believe how well it went.

“Being the break of the drought, we were very worried about competition from weeds that we might not have controlled when we sprayed early, but it just ripped up out of the ground and there wasn't a trace of any weeds. It was perfect, it just kept growing and growing.”

After sowing, the Hooton’s then didn't touch the paddock until cutting, which took place on the 5th May, and exceeded expectations.

“We got a yield of 8.3 tonnes per hectare, so 30 round, four-by-four bales to the hectare, which I don't think we've ever had a yield of Rhodes grass come off a paddock like that. It's the sort of yield you expect for a forage oat hay crop,” he says.

Carl says the quality was the icing on the cake, reporting that it was unlike anything they had ever seen, to the extent when his father sent photos of the first Endura Rhodes grass bales, the quality was so impressive that Carl presumed it was oats.

“The quality was just unreal, the palatability of the hay and the cleanliness of the broad, soft leaf. It was amazing, we didn't think there was such a product available,” he says.

“It had a perfect leaf-to-stem ratio, there was plenty of stem, so good fibre in the hay, but the leaf just outshone itself. We had the hay feed tested and it came back at 10.5 per cen

t protein, which is a great result for pasture hay.

“Older Rhodes grass varieties can be very wiry, very stalky, non-leafy type of pasture, which makes good roughage hay, but we didn't expect to make such a good quality fodder product from a pasture as we did with Endura.”

Since the successful first cut, the Hooton’s have left the paddock to idle through what turned out to be a drier than average winter. Warmer weather and storms in spring 2020 means a second cut is likely by the end of November.

Customer feedback from the local beef and dairy hay markets serviced by the Hootons has been excellent.

“They have told us it's the best Rhodes grass hay they've ever fed, it's as simple as that. Rhodes grass hay is fairly common around this area, and for the local people that have fed it for years, that's pretty good feedback,” Carl says.

“We are 100 per cent happy with Barenbrug and Endura Rhodes grass, and will definitely grow more of it in coming seasons, there's no other product we'll be putting in the ground, and with my Norco job, I will certainly recommend it to others as well.” 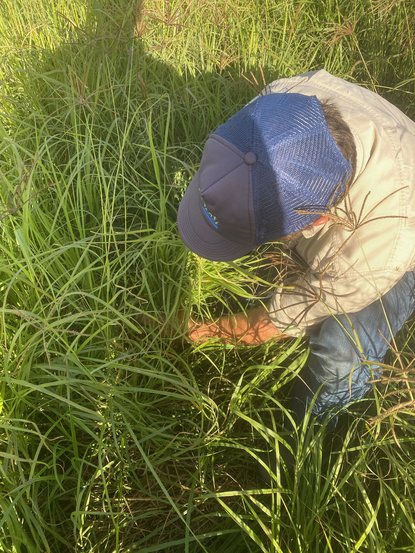