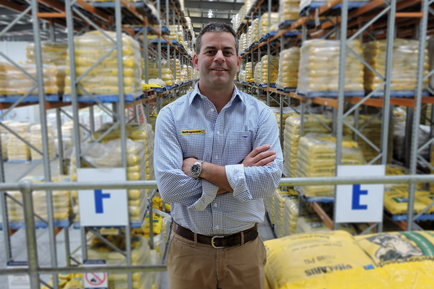 AFTER more than 25 years experience across the agricultural chemical, machinery and wool sectors, Toby Brown is excited about the new opportunities presented within the pasture seeds and fodder crop industry, combined with the energy of the team he has joined at Barenbrug.

Toby worked with Fox & Lillie in the wool industry before starting with Nufarm in its Croplands Equipment business as a Territory Manager for Victoria and Tasmania during a time when self-propelled sprayers were being introduced.

He rose through the ranks at Nufarm in marketing and other roles and was Country Manager in the UK for three years after managing its commercial business in Africa and the Middle East, together with its non-crop business in Europe, based from Germany.

He said he was excited by the new challenge as National Sales Manager with Barenbrug and the growth opportunities for the business.

“Ag chem has seen many challenges in recent years, whereas greater proprietary positions exist in the seed industry,’’ Toby said.

Barenbrug is a member of the Barenbrug Group and Toby said it was encouraging the Netherlands-based company had recently returned to 100 per cent family ownership.

“There has been some consolidation in the industry and Barenbrug has an independent position and a very strong brand, team and product portfolio, which positions the company well for future growth.’’

He said the scheduled opening of Barenbrug’ new $15 million world-class facility at Toowoomba in Queensland later this year was another positive development and testament to the ongoing investment by the Barenbrug Group in Australian agriculture over the last three decades.

“It will provide a capacity increase for customers and excellent ability to increase sales, which is exciting.’’

Toby said Barenbrug was conducting collaborative R&D work with several organisations. Its R&D sites, including at Howlong in Southern New South Wales, allow a great opportunity for the company to be more technically focused and to share this knowledge with customers and the industry.

Barenbrug has technical agronomy partnerships with AgriBio in Victoria, the South Australian Research and Development Institute (SARDI) and Queensland Department of Agriculture and Fisheries, among others.

“There are many opportunities and strong indications that industry organisations want to partner with Barenbrug, which is very promising,’’ Toby said.

Toby said he was delighted to be joining Barenbrug and meeting the team across the country, including the international sales group, during one of the busiest times of the year for the industry and was eager to catch up with customers in coming months.