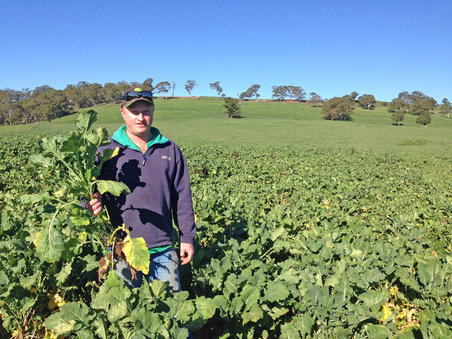 Oberon beef farmer, Mark Mawhood. Is growing Leafmore brassica and Dictator 2 forage crops for his Angus beef herd. Leafmore is a hybrid type forage brassica, with high yielding dry matter, good leaf to stem ratio. With superior growth during cooler temperatures it offers an exciting feed to extend the feed window. Depending on conditions 10 to 12t DM/ha of production is likely within one season. Dictator 2 has replaced the original Dictator barley which was widely used until around 2010.

Renovating weedy, underperforming pasture paddocks doesn’t have to come with a net loss to the business, according to Oberon beef farmer, Mark Mawhood, “Sunny Point”. Mark, who farms about 800 ha with his three brothers said the successful introduction of Leafmore brassica and Dictator 2 barley forage crops has helped them tackle important weed issues.

The results have been so good that forage crops have now become a central part of their management strategy, with paddocks being pulled out of pasture for up to three years while they get a ‘clean-up’.

Mark said they select paddocks that are underperforming, in need of improvement, and work on a three-year program.

The program starts with sowing Leafmore brassica in September. Once established, this brassica variety can be regularly grazed for up to 18 months, given good seasonal conditions.

Over the past couple of years however, Mark has ‘cut it out’ the following April and direct drilled Dictator 2 barley straight into the brassica stubble.

“The cold tolerance claim on Leafmore was attractive because it meant we could get it in the ground earlier which just means more feed.

“I try to run the paddocks pretty hard coming into sowing, then let them rest a bit to allow the weeds to germinate and then spray them off with a glyphosate knockdown. We leave it for a little while and then plough it up and get it prepared, and depending on how long it is before we sow we may spray it off again with another knockdown.

“In-crop we can use most of the canola products on it, which lets us really clean-up the paddocks. Nodding thistle is a major problem in this area and we have used Lontrel on Leafmore safely. Lontrel does a good job on a range of thistles and other broadleaf weeds like capeweed and fat hen.

“ForageMax is another good product we use, and of course there is a wide range of products for grass control.

“Leafmore grows quickly and has very good palatability. We wean one lot of cattle about Christmas, so I try to keep a paddock aside to put weaners onto. We’ve found we can graze it three to four times over summer and into autumn if we look after it.

“At that point we have been direct drilling the Dictator barley into it, but if you had the right conditions you could let it go right into the following summer and leave the cereal planting for the following autumn.

“Dictator 2’s a fast growing, fast to graze forage barley. We have very hard winters here and despite that it grows well and recovers well after grazing.

“Being a cereal it also has a range of herbicide options and the clean-up in the second year is important to our overall strategy of lowering the weed seed burden.”

Mark said they are aiming to grow the business to 600 breeders on the property. They currently have 500 Angus breeders and depending on seasonal conditions also trade steers.

It is a self-replacing herd, aiming to sell off 12 to 16 month-old.steers at 450kg live weight.

“Year round, farm wide, I’m aiming for 1kg/day. If I can get 1kg weight gain per young animal per year day, that’s 365 kg per year.” Mark said the farm is running at the equivalent 15 DSE, year-round.