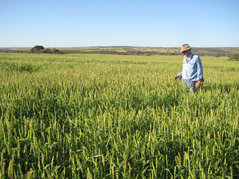 Dictator 2 forage barley at a glance

Eneabba farmer Sam Mills in one of his Dictator 2 barley paddocks in 2017.  This forage crop sown at 55kg/ha in July still produced well despite the late break.

After successful results last season, forage barley and oat crops are set to become an integral part and a key to unlocking greater sheep numbers and production for the Mills family of Eneabba.

David Mills, who owns the Eneabba farm store and helps his son Sam with their farm, says he’s excited by what they have seen with forage crops, especially in the season just gone.

“We reckon we can increase sheep numbers by at least another 20 per cent, without a lot of changes, aside from growing more forage crops,” he said.

The Mills family currently crop about 600 hectares and while the area sown to crops is not expected to increase markedly, there will be a move to sowing more Dictator 2 barley and Mammoth oats.

“The late break in 2017 was the real eye opener,” said David. “A shortage of feed, rapidly cooling conditions and the prospect of a short growing season really put pressure on. Dictator 2 barley really came of age for us. “We’d been playing around with it for a few years. The late break meant it came up much later than normal. Some of it wasn’t sown until the first week of July.

“By the end of July, we’d already had sheep feeding off it. That’s the brilliant thing about the Dictator 2, it’s just up and out of the ground so quickly. It was stocked 24 days after sowing at the rate of 10 ewes and lambs per hectare. “The early grazing quality is fantastic, and it can take the grazing. “As an example, we put about 1400 sheep in a small three hectare holding paddock. After a couple of days, they’d grazed the barley right down. The stock was taken off and four days later green shoots appeared. It bounced right back!

“The advantage for us with the Dictator is that we get two good grazing’s during the season and then have a number of options in the spring. It can be grazed off, cut for hay or let go to seed and harvested.

“Off one 43-hectare paddock that was a second-year hay crop, which is not recommended, we cut 340 six-foot bales, or about 160 tonnes (3.9 t/ha). “That paddock had two early grazing’s and was sown late. It was an absolutely phenomenal result. It makes beautiful hay and being an awnless barley variety is a distinct advantage.”

David said the other forage cereal variety he sees potential in is Mammoth oats, which he believes could extend the greed feed window by about three weeks.

He said their livestock program was to mate 3500 ewes each year in what was essentially a three-way split – between a third super fine merino’s, Dohne rams put over reject super fine ewes and Poll Dorset rams put over their ewe progeny. Their sheep numbers vary, but average around 6500.

The Mills family believe Dictator 2 barley delivers great grazing value, the options of hay or grain and it looks set to increase their livestock production.