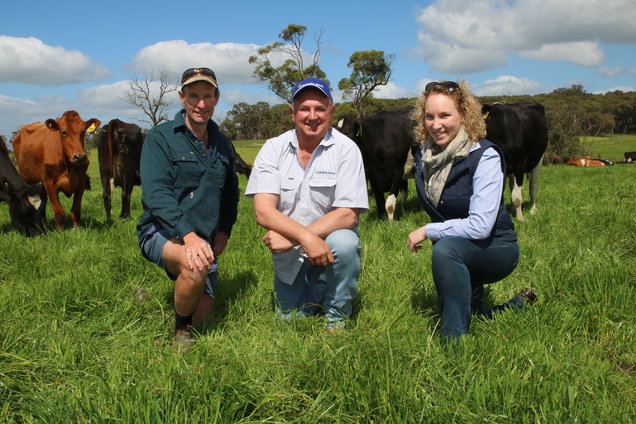 Yarragon dairy farmer, Craig McWhinney (left), aims to produce high quality pastures that generate a balanced diet that is cost effective to produce. He said this paddock of Bealey ryegrass is an ideal mix of energy, protein and fibre. Mr McWhinney is pictured with Graham’s Seeds owner Frank Templeton and Emma McDonald of Barenbrug.

When Craig McWhinney of Yarragon looks for key farming elements that really drive the profit on his Gippsland dairy, there are some clearly defined standouts. Mr McWhinney has worked for almost 20 years as an industry consultant on pasture agronomy, livestock grazing and soil fertility and over the past decade has been slowly progressing into full time dairy farming.

Ten years ago, he bought his first 80-hectare property at Shady Creek with partner Kellie. Since then, they have been on a path of expansion adding another 28 hectares five years ago, and more recently buying neighbouring 21 and 32 hectare blocks, which they use for young stock and dry cow grazing.

Mr McWhinney believes one of the key things that really drives down profit is percentage of imported energy.

“It’s fine to get big milk production per cow, but if you’re buying in most of it through the front gate through grain or fodder, then it becomes a very expensive hobby,” he said.

“So, we try to keep feed costs to a level where we can actually make a profit out of it and it really comes down to cost per tonne of dry matter.

“Last year it cost us $115 for each consumed tonne of dry matter. The actual cost to grow it would have been less than that, because our cows don’t consume everything we grow.

“Within that was the cost of fertiliser, leased blocks, pasture renovation, any fodder conservation and so on, so that’s about half the price of anything that I can by in.

“It just makes sense to grow as much pasture feed as I can and for the cows to consume as much as they can and put it straight in the vat. Cut out all the costs in between.”

Mr McWhinney said he is continually sowing and over-sowing high yield potential pasture varieties, with the aim of exploiting their capacity. For the past six years Bealey has been the backbone of his ryegrass pastures. A true perennial ryegrass, Bealey has delivered strong growth, in-particular in winter through summer.

A highly palatable tetraploid, Bealey is very late flowering and its long-term persistence and NEA2 endophyte have made it a particularly attractive pasture option.

“I’m always trying to aim for the higher end, so I’m looking for a grass that can grow 365 days a year of high quality, high quantity and a good balance of energy and protein.

“Bealey doesn’t have a lot of early seed head emergence that would reduce quality, and the NEA2 endophyte is handy for insect control.

“With good spring and summer rainfall Bealey will stay green and productive. In autumn, it can look quite brown, but when we get a bit of rain it will green up within a few days will take off again.”

“Shogun is a new one I’ve tried this year in four paddocks. At this stage, it’s looking very promising. Shogun is a hybrid two to three year option which will have a good fit for this place.”

“When it comes down to it, seed is only one cost. To that needs to be added things like fertiliser, herbicides, insecticides and contractor costs that you’re going to have to pay regardless of which seed you chose to plant.

“To put it into perspective, comparing seed at say $8/kg compared with $4 that’s sown at 15kg/ha would be an extra $60/ha. Just one roll more of silage over 365 days and it’s paid for itself.”

Next on Mr McWhinney’s key farming elements list is how many kg/ha of dry matter do the cows consume. He targets 11 to 12t/ha. It can get up to 14 t/ha in his dryland dairy with good seasonal conditions.

Third on his list is how much of that pasture production is consumed directly by the cows. Having enough milkers on pastures so they eat the majority of it as it grows is important.

“I try not to put a lot of my pasture through expensive fodder harvesting,” he said. “That way I don’t have to pay to grow the grass, then have to pay to have it made into silage and then have to pay again to feed it out. “There’s an inevitable cost and time wastage with making silage and feeding it out, whereas if the cows eat it directly as it grows in the paddock, there is not a lot of wastage in the system or expense. Cow power is pretty cheap.”

To maintain quality and pasture density, broadleaf weeds on Mr McWhinney’s dairy are sprayed out in March and paddocks that need it are over-sown.

He aims to graze each paddock two or three times before winter and targets the two and a half ryegrass leaf stage to maximise feed quality.

He has 50 paddocks on the farm for quick stock rotation. With a grazing pressure of 100 to 120 cows per hectare the cows are on and off the paddocks quickly before the fertiliser truck comes in.

Over the farm the stocking rate is above 3.5 cows per hectare.