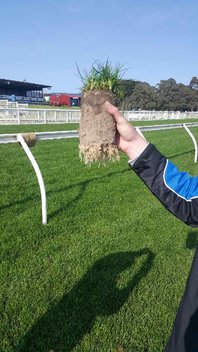 Held in October, Moe Racing Club’s ‘Moe Cup’ featured prominently as a highlight in country Victoria’s regional calendar. Considered one of Victoria’s youngest and most vibrant courses, Moe racecourse has undergone extensive renovations in recent years and by all accounts, pundits are pleased with what they see.

Track Facilities Manager, Brendan Jackson, explained track renovations started about four years ago. A StrathAyr track system was put in place and the racecourse sown down to Village Green kikuyu.

Located about an hour and a half east of Melbourne and between the magnificent Baw Baw Ranges to the east and Strzelecki Ranges to the west, Moe Racing Club has to weather a very cold winter. The warm season kikuyu really struggled, especially in the cold months, so the search was on to find turf varieties more suited to the conditions.

“I did my research and picked out four Barenbrug racetrack ryegrass varieties that I thought would work well together through all seasons, including winter,” Brendan said.

“After talking with the company’s Turf Portfolio Manager - Matt Merrick, the decision was made to go with the ryegrass varieties of Impact, Kidman, RPR and Rohan. Each had specific qualities that I liked, and they all went into the bag in a blend of 25 per cent each.

“On Moe Cup day this year the track was in the best condition it’s been since I’ve been here. I think the blend is an excellent mix for our conditions. When we walk the track, we don’t see any weaknesses in the turf.

“To me it’s largely about resistance to diseases and the soil root profile. How the roots are growing and how healthy they are, is going to determine how well the grass is going to grow and how well it comes back after stress or mowing. The top will come back if you have a healthy root system.

“Basically, the Heritage ryegrass mix just smothered out the kikuyu. We need grass that can handle the traffic and that’s what it does.”

Brendan explained Moe Racing Club has 14 club races a year. They generally have racing once a month throughout the year, although not in March, which is his opportunity to renovate the track.

They have two meetings in November and two in April. With gallops and jump outs, it averages out to about 200 horses a month - which he said is the equivalent to having a race meeting every two weeks.

“Consistent traffic means we need grass that grows all year round. Down here soil temperatures don’t really get above 20C until December and then drop down again by the end of February.

“We core through spring. When we re-sow and renovate in March, we generally scarify, then Verti-drain monthly from March through to September with 12mm tines to help the roots get down.