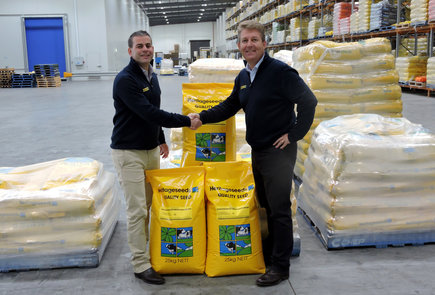 Growing pasture seeds and fodder crop business, Barenbrug, has today announced the appointment of Toby Brown to the position of Managing Director with the company, effective from July 1, 2019.

The appointment follows the decision of former leader, Wayne Crofts, to join his family full-time in Perth and continue his career in the logistics industry to the automotive and industrial sectors.

Barenbrug is a member of the 100 per cent family-owned Barenbrug Group, headquartered in the Netherlands, and has been on a rapid growth path in Australia, driving investment and innovation in the local industry. The company produces a broad range of temperate and tropical pasture varieties, fodder crops, forage cereals and field crops, as well as turf and amenity grasses.

On the heels of acquiring Queensland-based companies, Australian Premium Seeds, Blue Ribbon Seeds and Premium Seed Coaters, the business is set to open a new $15 million state-of-the-art facility at Toowoomba in Queensland later this year. This will complement another major facility in Melbourne, smaller sites in Brisbane and at Walkamin in Queensland, as well as third party logistics warehouses.

Barenbrug also has its own research and development sites and strong collaborative partnerships with several technical providers including AgriBio in Victoria, the South Australian Research and Development Institute (SARDI) and Queensland Department of Agriculture and Fisheries.

Toby only recently joined Barenbrug as its National Sales Manager, bringing 25 years experience to the company from across the agricultural chemical, machinery and wool sectors both domestically and internationally.

Over the past decade, Toby has held a number of senior global leadership roles with Nufarm, including in Germany to cover Europe, the Middle East and Africa, and as Country Manager of the UK, before his return to Australia last year.

Toby has also held marketing and global product management roles, and, prior to joining Barenbrug, he was assisting Nufarm’s industrial sales division and its partnership with Farmers Edge, which provides precision digital solutions to help guide farm management decisions.

He said he was delighted to be guiding the next phase of growth and direction for the Barenbrug business and Barenbrug Group in Australia.

“It’s exciting to be taking on the leadership from Wayne with a business that’s in strong growth mode and with the energy of the Barenbrug team for the future,’’ Toby said.

“Despite the tough conditions in various areas of the country, the outlook is promising for many livestock commodities and the industry is on the cusp of significant developments with pasture and fodder crops that has the potential to boost the productivity and international competitiveness of our producers.

“Barenbrug is now unique in offering such a breadth of varieties, enabling us to help deliver higher production in southern livestock systems, mixed temperate and tropical zones, right through to northern tropical enterprises.

“Our Toowoomba project is the largest investment of its kind by the Barenbrug Group and will support the increasing demand for our tropical pastures, as well as the expansion of the northern Australian agricultural industry, including irrigated production.

“New seed coating and treating lines at Toowoomba will also support our developing exports to the Middle East, South America and Europe.’’

Toby said he looked forward to meeting with Barenbrug’ retail customer and industry partners, as well as with producers around the country, in his new role over the coming months.

Toby and Wayne will continue to work closely together in the upcoming period to ensure a smooth transition for the Barenbrug business.

Photo: Wayne Crofts (right), Barenbrug, with the company’s newly appointed Managing Director, Toby Brown. Toby and Wayne will be working closely together in coming months to ensure a smooth transition for the Barenbrug business.