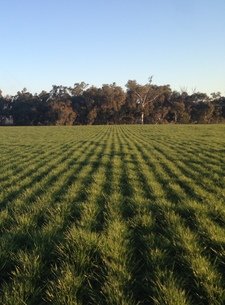 Developed by the NSW Department of Primary Industries at Glen Innes and proven in regional sites in key fescue zones, five years of evaluation has shown Barnaby to be highly productive and significantly more persistent than current leading varieties.

Research at ‘Gara’ in Armidale NSW from 2011 to 2014 has highlighted the top performance of this exciting new fescue variety.

In the trial, Barnaby established with very good seedling vigour, produced the highest weight cut in October the first year and went on to be the variety that performed most consistently across the seasons.

Final plant density, persistence measurements at the Armidale site taken in November 2014, showed Barnaby was more than 13 percent higher than the next best variety Dovey.

It was way above the other entries, including benchmark varieties Demeter and Quantum II Max P, which in comparison had largely disappeared after two tough summers.

Research Scientist, Carol Harris, said “NSW DPI trials show Barnaby is an excellent choice for growers who are looking for extra grazing persistence whilst maintaining production across all seasons.

Barenbrug Portfolio Manager, Don Ross said, “As can be seen from the trial results, it offers livestock producers higher winter, early-spring and autumn production than would typically be expected from a summer active fescue.

“Barnaby exhibits excellent persistence over extended dry summers. It also has a later heading date than many others for increased quality over the growing season.

Barenbrug has advised Barnaby seed would be available for sowing in autumn 2016.

Bred from material of East Sardinian origin, and developed across temperate Australia, Barnaby can be sown wherever continental fescue is grown.

Barnaby, at a glance: