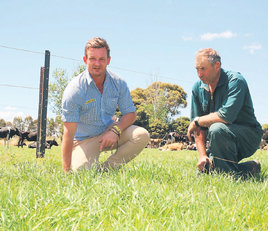 Shepparton dairy farmer Ron Newman (right) shows Reece Hardwidge from Barenbrug his pastures over-sown with Shogun ryegrass. Ron said he is looking for a vigorous easy to grow ryegrass that’s going to grow a big bulk of quality dry matter per year. “It’s all about kilojoules per cow per day. Shogun’s provided feed through winter and spring in a year that was difficult in terms of being so wet. It’s taken a good pounding and it’s persisted, so it’s a tough one. Some varieties can just chuck in the towel if it gets too wet or cold. I’ve been impressed with it,” he said.

In June 2015, Ron and Sheralee Newman came to Australia from New Zealand to take on their own Dairy farm. Excited by the prospects they purchased 70 hectares just out of Shepparton that had 58 hectares suited to flood irrigation.

Coming from a history of managing larger 300 to 500 cow dairies, Ron knew the main push had to be on renovating pastures and pushing up productivity.

His overall aim was to establish permanent high yielding grazing over the entire area that can be flood irrigated.

“Because we have a small acreage, we must have areas growing all the time,” he said. “I’ve always milked a lot of cows and we’re aiming to get to the same level of output here as we did in NZ.”

Early assessment put his pastures into two categories. Some were completely rundown, full of couch grass and other unproductive weed species and required total re-sowing. Other areas had a reasonable grazing base, but were still in need of substantial renovation.

“We jumped into a pasture rebuilding program in autumn 2016 and we got a contractor in with an air-seeder. “The really poor paddocks were sprayed out to remove the couch and rubbish weeds. There, we went in with an annual ryegrass and Persian clover. After a chicory mix over summer the plan is to sow those paddocks to permanent pasture this autumn.

“In other paddocks where we wanted to get more bulk and tonnage, we over-sowed in the autumn with 20kg/ha of Shogun, which is a late flowering hybrid ryegrass. “It was a difficult autumn for pastures to establish. Early March was very hot and dry, but we got the water into it and the Shogun persisted well and grew well through the winter. We just kept grazing it on a normal rotation and it grew well into spring.

“Putting the Shogun over pastures to thicken them up went really well. It was done more as a trial to see how it would work and it’s certainly impressed me enough to want to sow more this year. “Even with an extremely wet winter, where everything got chopped up by the milking cows, we rolled it and it bounced back. “In fact, I thought the Shogun out-performed the annual ryegrass pastures to be honest, even through the winter. Every time the milking cows came out of the paddock we went in with urea or urea mix and if you keep if fed it goes well you’ll get a good life out of it.

“Over-sowing when you can do it, doesn’t take pastures out of production for months on end, so I think that’s a better way to go. ”Ron said a wet 2016 did cause problems, but also brought opportunities with cheaper temporary water for irrigation this season. In his first year on the property they averaged 1720kg/ha milk solids. The 2015-16 season was characterised by dry seasonal conditions, high water costs, reduced pasture availability and higher feed costs. Even though they had to reduce milking cow numbers by about 10 percent, Ron believes they will achieve close to that again with less cows, but better quality pastures.

“Last year we made 300 rolls of silage and bought in oaten hay to feed dry cows through winter. This season I decided not to make silage, I just wanted to feed the cows, renovate the pastures and with the amount of hay around we’d be better off to buy in oaten hay. “There’s no point starving the cows to spend money on making silage,” he said.