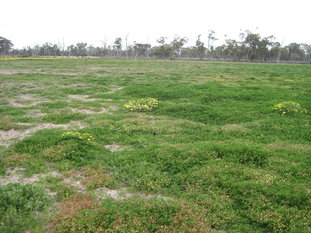 More than one million hectares of agricultural land in the south-west of WA are severely affected by salt. Dryland salinization is threating anywhere between an additional 2.8 to 4.5 million hectares of low-lying or valley floor soils, so the race is certainly on to implement sustainable solutions.

Water management, surface and subsurface drainage, tree planting and perennial pastures all have their role to play in facing the challenge. And like many farmers, east Wickepin grower Chris Turner is working his way through which management decisions are right for him to tackle the issue.

Chris has about 120 hectares of low-lying soils were traditional species were struggling to grow.

“We could see that particular area was starting to become salt affected, supporting only barley grass, a bit of ryegrass and wire weed,” he said. “I knew we had to do something, so I started looking for a salt tolerant pasture variety when I came across an annual medic called Scimitar. It looked good. The problem was there wasn’t any in WA, so we approached Barenbrug to see if we could grow it here.”

With four years’ experience growing Scimitar now behind him, Chris said the results have been nothing short of astonishing. “For the clay flats and land that looks like it’s starting to become salt affected, I’d choose it over and above anything else I’ve seen,” he said. “It’s meant that land that was getting close to useless has become productive again. “When we first seeded it, there was about 25 hectares that grew no cover because it was just too salty. This year the bare area was down to about four hectares, so the salt scald has shrunk dramatically.

“Looking at the nodulation on Scimitar roots, the nitrogen production appears very good. And it could open other options like growing barley crops there, which would be good from the point of view of broadening the chemical options.”

Chris said, as with most medics, the broadleaf herbicide options with Scimitar were restricted and a sound weed management strategy was needed. This year he sprayed diuron and treflan pre-emergent to control wireweed, crassula and toad rush. Grass selective were used on the grass weeds. The area was sown four years ago with 10kg/ha of Scimitar seed. Each year since he has applied 100kg/ha of 3:1 super potash.

“There is work to do to keep it clean. I think if you just scratch it in at 5kg/ha and hope that it’s going to work, it’s probably not going to do much for you. But if you want to put the effort in, it will.

“Managed well, a single sowing should keep it going for a long time because it’s 24 per cent soft seeded. There’s a good balance between soft and hard seed to regenerate Scimitar, as opposed to the older medics which were only about five per cent hard seed and they never seemed to persist. “Twenty-four per cent soft seed means there’s enough to regenerate and there’s also enough hard seed to carry on if you get a false break or you get a poor year when it’s not going to produce very well.

“Red legged earth mite (RLEM) and Lucerne flea can damage it at the seedling stage, but once it gets up it’s no too bad. “We control RLEM with a bare earth spray. This year we put the treflan and diuron on, ripped it up with sweeps to bury seed because it’s an aerial seeder and then put the earth mite spray on bare soil and left it.”

Barenbrug WA Territory Manager, Tim O’Dea, said Scimitar has a lot of qualities WA growers would like. It is a hybrid spineless burr medic developed to replace Santiago burr medic. This pasture species would be highly productive on saline soils which were not subject to prolonged waterlogging.

“Scimitar has a more erect growth habit, higher level of soft seed and increased herbage production relative to Santiago. “It’s a versatile medic with good adaptability into a range of soil type’s, not just heavy high pH soils, and that makes it a good fit for WA’s varied soil types.

“Scimitar is the base component of a salt land mix formulated by Barenbrug combining salt tolerant legumes including Neptune Messina, Strawberry Clover, annual clovers and the grasses, tall wheat grass and Pucinellia. “This mix is proving very successful in reclaiming salt affected country to productivity,” Tim said. He said limited seed would be available for 2018 planting.