Bigger animals quicker! That’s a main goal for Burrumbeet growers Michael McKinnon and his father Rod. They farm 800-hectares with a production mix of roughly 75 per cent livestock to 25 per cent cropping. The McKinnon’s currently have about 60 head of cattle and 2000 first cross ewes they mate to poll Dorset rams for prime lamb production. In addition to that, Rod operates a mobile seed grading business and Michael runs a semi business as well as running the farm.

Like every year, last year threw up its own special challenges and the extremely wet winter and spring conditions did take a toll on many of their pastures. Notwithstanding that though, one block that really stood out was a paddock newly sown to a Tornado mix of Bealey and Impact 2 perennial ryegrass’, along with Antas and Monti sub-clover. “The winter and spring were very wet,” said. Michael. “We had close to 12 inches of rain in September. It was one of the wettest years we’ve had. “What stood out was how clean – disease wise, that newly sown paddock was in a very wet year. The plants were under stress and they stood up very well. “That area was canola the year prior and wheat the year before, so it was clean and it was a good opportunity to plant it back to pasture. “It was disced in March and dry sown at the end of March waiting for that first rain to come. Once it got established we continually grazed it up to mid-October when we took the sheep off. It got 50kg/ha of urea in July, was sprayed for weeds during the year and had 100kg of single strength super. “We were just very happy with it. From July to October, 30 acres supported 200 ewes and about 240 lambs and over 16 weeks, the lambs were up about 40kg live-weight. “We moved them off, and after mid-November moved lambs back on to finish them off. The paddock was still hanging on and green by mid-December, when a lot of the other pasture had turned.

“It just came through with flying colours.” 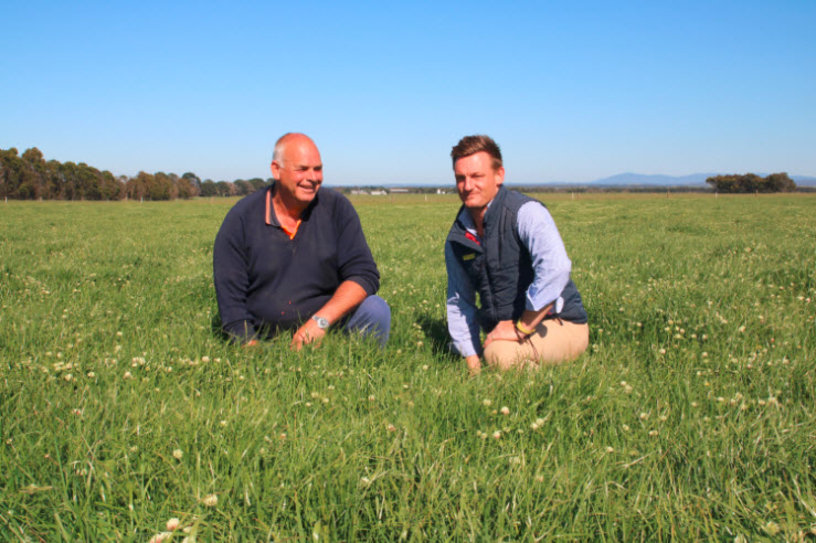 Rod McKinnon (left) of Burrumbeet shows Reece Hardwidge from Barenbrug this paddock of Bealey and Impact 2 perennial ryegrass, Antas and Monti sub-clover. Some balansa has also come back with the wet conditions. Despite one of the wettest years they’ve had, this Tornado mix remained highly productive over winter and spring and delivered a quick turnaround for their prime lambs. By mid-December it was still green while other pastures had dried off.