A competition to encourage best practice farming and agronomy based on a ryegrass variety fit for purpose is sure to see some pretty impressive pastures and some innovative ideas to get a hand on the prize.

The 2021 season focused on mid to late annual ryegrasses proved to be more than just a competition crowd pleaser. In the face of a wet late spring to summer planting season, it has saved the bacon when summer forage crops couldn’t be planted.

The competition, conducted by Norco Rural, Grafton, attracted entries up and down the Clarence Valley which is known for its rich alluvial soils and sub tropical rainfall. Two competitors, Mick Kelsall of Parraweena Highlands Cattle Co and Terry Lewis of Maclean have used slightly different approaches to annual ryegrass to suit their operational needs.

Breed up north, background in the east

Terry Lewis operates out of two properties – Maclean on the northern end of the river system and Southgate to the south. His focus is on producing Angus x Wagyu F1s and Angus x Brahmans for the feedlot market. The weaners are taken to the Southgate property between March and May for finishing with feedlot entry weight in the order of 350-450kg. Backgrounding and breeding is conducted on the Maclean property.

Ryegrass is planted on the Southgate property around mid-April – 50% into kikuyu and 50% into worked ground. His experience to date shows that the ryegrass (a tetraploid annual) establishes around four weeks quicker into worked ground. Growth of the ryegrass is allowed to reach the three-leaf stage, allowing it to establish a solid root system ahead of weaners grazing. For bulk and dry matter, oats and/or leafy turnip is planted with the ryegrass.

“I keep things pretty simple and listen to the advice of agronomist, Georgie Lawrence of Norco, which is to mulch and plant in April. When I plant, I also add white clover and chicory and then aerate the soil a couple of times,” said Terry.

“Last season my germination rate was the best I’ve had so far. In the oversown paddock (into kikuyu) the ryegrass germinates well, however is slower to establish against the kikuyu until the first frost in June and then it really comes away. The white clover then comes away in the spring and chicory in the summer when the kikuyu picks up again to provide a good seasonally balanced paddock.

“The results mean that I don’t really have to worry about hay or silage, it’s a lot cheaper to produce a kilo of beef from a grazing cow. If the feed is starting to wane, I’ll turn them off earlier, rather than buy in feed.”

Taking advantage of the alluvial soil and higher rainfall of the Clarence River near Grafton, is the Appletree property. Across around 1,000 acres fodder is grown to serve three other properties for Parraweena Highlands, a stud Angus and trade cattle enterprise.

Two of the properties, at Marengo and Hernani are purely for grazing purposes, much of it is forestry, running more than 2000 head of Angus and is also home to the stud Angus breeding. The fourth property, Willowtree, south of Tamworth is also grazed and has some legacy Herefords from previous stud herds.

In the wake of the drought that hit the Armidale region, the purchase of Appletree has proved to be a prudent decision. Covering around 1,000 acres it is planted with a range of forage crops – forage sorghum, soybeans and cowpeas for summer; an annual ryegrass principally for winter. Summer planting usually takes place late October to November.

Depending on the season, Appletree will be grazed for the ryegrass, baled if there is sufficient yield, before planting of the summer crops which will also be grazed and baled. “In previous seasons, we would normally do round bales and store it,” said Mick. “The drought that hit in 2019 was hard – we struggled to get enough bales to tide us over. For the 2021 season, we chose to plant mid to late heading annual ryegrasses to take us up to the summer crop planting season. That would give us a couple of cuts and grazing, then move over to the summer crops.

“It was lucky we did – the normal summer crop planting time was so wet we haven’t been able to get in the paddock to plant, the ryegrass will tide us over until we can plant it again in April.”

Mick’s management of the ryegrass is to strip graze it down to about 7-10cms and move the cattle on and top dress the paddock. Bahia grass is a problem in the region, so the introduction of ryegrass, and a small percentage of Rhodes grass is designed to out-compete the weed. Appletree is at the cross over between temperate and tropical so a mix of temperate and tropical legumes is designed to increase soil nitrogen.

Competition wins for crops and community

Instigated by agronomist Georgie Lawrence, Norco Grafton, the competition was aimed at connecting with farmers in the region to discuss best pasture production in winter. Normally conducted in a field day, covid lockdowns prevented Georgie from hosting such events.

“The competition was initially based on a minimum 5 acre lot, but it was really to show that it could be extended to a much greater area. I also wanted more conversation between growers to share their ideas and techniques and recognise their efforts,” said Georgie.

Supported by Barenbrug, Terry’s pasture took out first prize, while Mick came a close second. Both Terry and Mick commented that the competition enabled them to try a new approach using the annual ryegrasses, with Georgie’s supervision and guidance throughout the growing season.

The results and recognition has encouraged both gentleman to consider using mid to late annual ryegrasses for the 2022 growing season.

Adam Firth, Commercial Manager, Barenbrug and a judge for the competition, said that it was a positive way to interact with growers from an agronomy point of view, and Georgie is to be commended for her initiative.

“The overall results showed that with good pasture management, annual ryegrasses can be a positive contribution to livestock enterprises and winter pasture productivity,” he said. 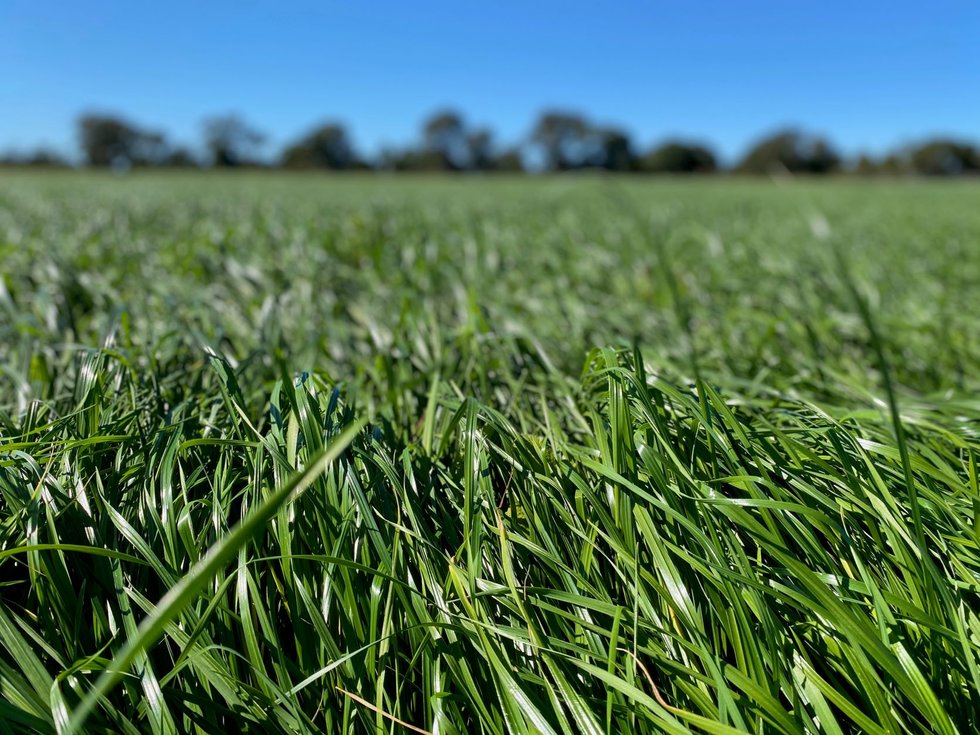 Above: Ryegrass is the winner in the Norco productive pasture competition