“I’m a beef producer, not a crop irrigator.” 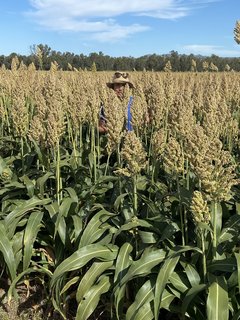 Such is the sentiment of beef producer Andy Watson, that any crops he does grow to feed his self-replacing Angus – Hereford herd needs to be simple and cost effective.

Andy’s operation is based on spring calving, followed by weaning between January and February, then fattening on feed rations from early autumn through to mid winter as the seasons dictate.

Situated on the Murray River near Albury Wodonga, the region is noted for its hot summers and ample supply of irrigation. Typical crops in the district include corn and forage sorghums for the summer, and southern temperate pasture for spring feed including ryegrass, Phalaris and cocksfoot.

Going against the tradition of corn, Andy in consultation with his agronomist, looked for more cost and water efficient crops to provide silage and feed ration for the weaners to reach feedlot weight when the spring pasture is dormant.

They landed on Barenbrug’s Liberty white grain sorghum - an unusual choice given that it is predominantly grown in northern cropping zones.

“For the past couple of years, we grew forage sorghum, like a lot of others in the region but the nutritional value is not there, it is better suited to roughage,” said Andy.

“Trying Liberty grain sorghum was definitely a risk, but the results we saw from the feedlots up north suggested it was worth a go. Our biggest concern was whether we would have enough heat during the summer months to get a decent crop.”

The summer of 2020-2021 did provide the necessary heat units, plus a rare wet February, giving Andy a more than reasonable crop.

Andy’s agronomist, Sheree Hamson, of Elders Albury, said she was initially concerned that the Liberty sorghum may not be able to acquire enough heat increments for maturity in the region but felt it was worth trying for its improved feed quality and protein in order to meet the needs of Andy and Anna’s cattle enterprise.

“The end result was extremely pleasing and will be grown again this year. The Liberty sorghum was a higher protein source and required less supplementation than forage sorghum to meet the livestocks’ energy and protein,” she said.

Andy planted 30 hectares of Liberty at 20 kg/ha, treated with OptiCote Plus seed treatment under a centre irrigation pivot from bore water. The seed treatment provided protection against chewing insects such as wireworms, as well as giving the option to spray Dual Gold to control some grasses and broadleaf weeds. Andy commented that the OptiCote treatment enabled him to give the very best chance of success for the crop.

The crop was planted in late November following the harvest of a Fuze ryegrass crop. Andy applied 15mm of water pre-sowing, then used a standard seeder at 6” spacing with a press wheel. A follow up watering a week later, and the crop was away.

A fertiliser at planting of 100kg/ha of DAP, plus a follow up of nitrogen (125kg/ha urea) was all that was applied. At harvest at the end of March, the plants were in the order of 1.5m high, with the headlage around 15-20cm. A standard corn front on the forage harvester was more than capable of cutting the crop.

The crop yielded in the order of 11tDM/ha; analysis of the crop showed that the metabolisable energy (ME) was 11.9MJ/kg DM.

“The use of Liberty grain sorghum is definitely not the norm in this region, but in essence Andy wanted a crop that was water efficient, would produce good yields and provide decent quality feed for his investment and labour,” said Allan Newman, Southern Breeding Manager, Barenbrug.

“His comment about being a beef producer not a crop irrigator is true, so the labour and water intensive crops like corn were not a preferred option.

“The tonnage of dry matter may not be as high, but the nutritional value of the silage and grain certainly counters that argument. It means for the weaner feed ration, he will only need to top up with a protein component, plus the spring ryegrass cut. And he has done it with basic tools. Taking the chance on Liberty grain sorghum this far south has definitely paid off.” 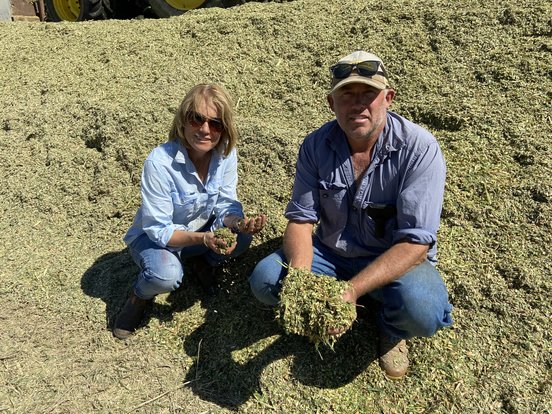