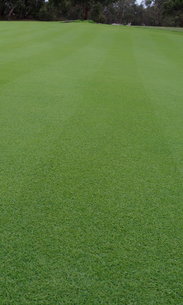 a Kingswood Country Golf Club greens based on Pure Distinction bentgrass as the best he’s ever played.

Speaking on the quality of the greens on ‘Evenings with Finey’, Marcus said, “Those seven greens that are in play at the moment are by far the best greens I think I’ve every putted on in 14 years of playing professional golf.”

“It’s (Pure Distinction) really fine,” Michael said. “I haven’t seen many bents like this that are just so fine. It gives such a consistent look. Some of the members that saw it said it looks like synthetic grass because of the amazing look. It’s quite phenomenal really.”

In the same radio interview David Capaldo, Head Professional at Kingswood Golf Club said, “You think of all the best greens you’ve ever putted on around the world and think the best surface you’ve ever seen. Those greens are so far from anything you’ve ever seen or stood on or putted on. They are unbelievable, I’ve never seen anything like it.”

Delighted to have received such positive feedback, Barenbrug Turf portfolio manager, Matt Merrick, said Pure Distinction is the latest advancement and takes bentgrass’ to the next level.

“The feedback I have received about Pure Distinction AgriCote has been amazing and makes me happy we can provide superintendents with such a great product. Superintendents and consultants have been astounded how well this bentgrass has performed.

“People have really noticed its colour, density and the fineness of the leaf compared to other varieties”.

Mr Merrick said Pure Distinction had excelled in independent trials conducted in Australia. He said the trial results have been replicated at many high profile golf courses across Australia and New Zealand.

For further information on the Peninsula Kingswood Development please contact Michael Cocking on 0409 230 244 or m.cocking@occmgolf.com. For details specific to Barenbrug Pure Distinction contact Matt Merrick, on 0413 442 811 or mmerrick@heritageseeds.com.au